Most of my work has dealt with various concepts for including the audience in gentle ways. On occasion I have created a few conceptual art works that are purely based on interaction between artists and participants.

2010: Vinyl. A project inspired by an exchange workshop between Denmark and Egypt. Supported by the Danish Egyptian Dialogue Institute.

I interviewed men in order to find a new vocabulary about male identity by setting up scrabble games between men, who didn’t know each other. 7 games were played. The participants were in their early 20iest to 60ies, they were gay, straight, bisexual, married, single, employed, studying and unemployed.

2009: Facebus. Supported by the Ministry of Integration.

The issue of inclusion is a reoccurring theme in several of my works. In 2009 I collected a cool group of artists to help me explore the issue of young people excluded in Copenhagen night life. A double decker bus was transformed into an analogue version of Facebook and parked in different city squares. Here participants could post profiles on the bus, tag, talk to Doctor Love, compose songs, exchange stories and much more. Produced by TeaterKUNST 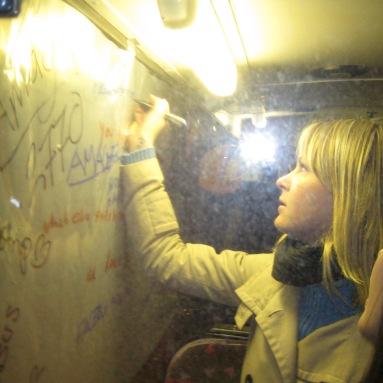